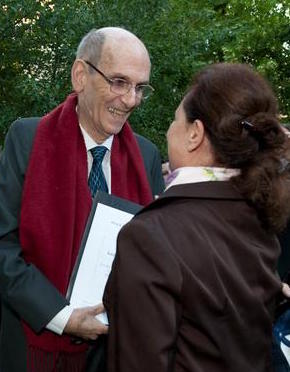 Professor André Haynal, a leading figure in the Ferenczi renaissance, passed away in Geneva on November 7, 2019.

He was born in Budapest in 1930 to an upper middle-class family of well-educated professionals. His father, Imre Haynal, an internist who would go on to become an outstanding figure in Hungarian medical and humanistic history, came originally from Transylvania – then a patchwork of various cultures marked by mutual acceptance.

The story of André Haynal was that of the liberal, humanist European professional faced with the constant challenges of the twentieth century: war, revolution, emigration and a new beginning. Motion and change were central to his life, yet his liberal, humanist value system remained unchanged in the moments of truth brought on by these historical and political challenges.

André grew up at the intersection of three cultures: Roman Catholic via the Szekler region of Transylvania on his father’s side and Hungarian Calvinist on his mother’s side, as well as the liberal Jewish culture of Budapest. After many vicissitudes – the Nazi occupation of Hungary in 1944, the siege of Budapest, the liberation and subsequent occupation of Hungary by the Soviet army, and his first, failed attempt at fleeing the country in 1948 – his student life began. He managed to combine philosophy and psychology, before switching to medicine. During the anti-Soviet uprising of October 1956, he was elected to the revolutionary committee of medical students, and after the revolt had been crushed, he had no other choice than to emigrate.

Fate determined that his new life was to be started in Switzerland. In Zurich, he was welcome to register at the university to complete his medical studies. Later, he was enrolled in the university’s neurological clinic in Zurich, starting his personal analysis with Paul Parin at the same time. From 1960 to 1964, he received psychoanalytic training at the Zurich Institute. After two years (1964–1966) in Lausanne, working in a Swiss psychiatric polyclinic with psychoanalytic inclinations, he moved to Geneva, where the new director of the psychiatric institute opened the doors to psychoanalysis.

Haynal’s qualifications – neurology, psychiatry and psychoanalysis – were highly appreciated, and in 1973 he was promoted to professor. After Hungarian and German, his latest adaptation meant a further linguistic shift to French. Haynal was the president of the Swiss Psychoanalytic Society between 1976 and 1979. In those years and in the 1980s, he often went to London, where he kept up with courses at the Tavistock Clinic and became acquainted with Rosenfeld, Winnicott and Balint – who became his supervisor and introduced him to the work of Ferenczi.

Haynal was a visiting professor at Stanford University twice, where he took up a new analysis, his third, with Emanuel Windholz, who was recommended by Hungarian-born, New York-based psychoanalyst Andrew Pető. However, in a wonderful example of the shift in languages that comes with emigration, Pető thought that Windholz, who had been born in a small town in what was Hungary at the time, could speak Haynal’s native language. However, it became clear that, as Windholz had studied in then-Czechoslovakia, his Hungarian was not quite up to the job, and even though his own analysis had taken place in Berlin, about 40 years on, he no longer spoke sufficient German either … a further linguistic change. It was nonetheless a significant analysis once they had settled on English.

While Haynal was at Stanford University, he was asked by Michael Balint’s widow, Enid Balint, to undertake the job of coordinating the publication of the Freud–Ferenczi correspondence. This marked the start of a monumental project, with a first volume being published in French in 1992. For Haynal, working with these letters represented a discovery of both Ferenczi and Freud.

André held seminars all over Europe – in London, Berlin, Paris, and Poland – and perhaps the longest group supervision, which spanned ten years, for candidates of the Hungarian Psychoanalytical Society, which left a deep impression on their psychoanalytic perspective. He played a decisive role in the development of the international Ferenczi network and in the establishment of the Ferenczi House in Budapest.

André Haynal received the Mary Sigourney Award in 2007, the greatest recognition from the international psychoanalytic community, for his outstanding achievements in psychoanalysis.

His manifold contributions to psychoanalysis are characterized by a combination of curiosity, an abstract philosophical mind and a rich emotional life. His restless intelligence found stable support in his third wife, Véronique, a psychotherapist herself and a partner in life as well as in writing. Their two children, Cleo and David, became cosmopolitan world citizens, which was so important to him, and in his last years André experienced the joy of being a grandfather to Orion.

Haynal’s life was full of highly significant encounters in many countries, which led him to paths that were always new: privileged personal encounters and friendly relationships, as he writes in his memoirs. We wish to recall how warm, receptive and encouraging he was. Last year, when the thirteenth international conference took place in Florence, Haynal wanted to be present in spite of his sickness and was happy to see that the Ferenczi renaissance of which he had become a father figure was on its feet and ready to be developed further.

Thank you, dear André, our friend, our colleague and our travel companion. Thank you for being among us and for sharing with us the introductory line in your book My Story: “Veni, vidi, vici.” We will carry your spirit with us.