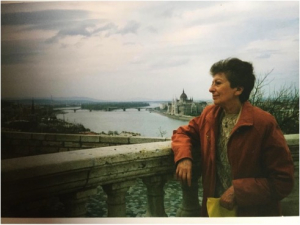 “We all have to create links, build bridges
between the past and the present, as well as between
elsewhere and here, or other people’s worlds and ours.
But who remains attached to two different cultures,
he or she, becomes a living bridge.” 1

The Editorial board announces with great sadness the passing of our friend and colleague, Éva Brabant-Gerö, editor of Le Coq Héron. Éva died on March 29th, 2021 following a long battle against cancer, never giving up her commitment and interest in the editorial work in a permanent dialogue with Judith Dupont and the members of the team. She will be deeply missed.

Eva Gerö was born on July 12, 1935 in Budapest. She was 21 when she left Hungary finding exile in Great Britain. At the end of the ’60s. she settles in France and starts her research on the Hungarian psychoanalytical movement in the meantime as a psychoanalytical journey. Scientific collaborator at the CNRS, she joins the Centre de recherches historiques where she accomplishes her thesis, Histoire du mouvement psychanalytique hongrois (History of the Hungarian Psychoanalytical Movement) sustained in 1985 at the EHESS (School for Advanced Studies in the Social Sciences) and published in 1993 at L’Harmattan under the title : Ferenczi et l’École hongroise de psychanalyse (Ferenczi and the Hungarian School of Psychoanalysis.) The achievement of her thesis led her to the encounter with Judith Dupont who considering her expertise of the subject invites her to build a significative part of the critical apparel attached to the Freud-Ferenczi Correspondence (published between 1992 and 2000). An impressive task that consisted in reuniting and writing the material for the notes that allow a reader to understand a correspondence in depth, Freud and Ferenczi’s correspondence contained 1236 letters. Eva took in charge the Ferenczian and Hungarian side, while Ernst Falzeder assumed the Freudian and Austrian part, under the supervision of André Haynal. In the journal, Eva Brabant-Gerö’s name appears for the first time in an issue (Le Coq Héron; n°84) entitled “The history of a negative therapeutic response”, The innocent culprit (The poet Attila József and his psychanalysis). Actually, the first publication of an important chapter of her thesis and the beginning of a long collaboration and the direction of a great number of publications of the journal, personal articles, original texts still unpublished in French. During four decades of active dedication, joining the benefits of her historical research, Eva brought her essential interest for languages and translation, her openness to theory and whatever her personal itinerary as a psychoanalyst added to her clinical experience. Her subtle understanding of the numerous articles submitted to the journal through the years was precious and always substantiated by her critical spirit and wide culture. She maintained her presence and participation in the Editorial Board until the very end. All who worked with her on an issue, article or translation can testify of the pleasure they experienced.

To our friend Eva

During one of our last phone calls while discussing some topic, Eva said: “You know Emmanuel, I cried on the day Staline died!” Her confession contained no self-depreciation, it just revealed the context in which she had grown up, the atmosphere of her adolescence and helped to define her specific approach of the theme we were considering: “education under totalitarian regimes.” She had lived under both, Nazism and Communism, and felt ready to elaborate from this ground avoiding focusing on her sole experience.

This is who she was, starting from personal elements but always trying to reach some universal and transmissible points of view.

The three periods of her life never stopped acting as the source and the desire to pass on her experience to the members of the committee and others. Each of these periods was characterized by a language, a country and a culture. Starting with the Hungarian years and her mother tongue and later her land of exile, Great Britain. Ultimately France, her country of adoption where she actually lived the longest part of her life.

During the ‘80s, as we worked together on translations, she once said that French – as a language – had come too late into her life. She was 21 in 1956 when she left Hungary and her mother tongue finding shelter in England, so English became her second language, a second nature as one could say. This didn’t work out the same way with French she came to learn ten years later. She meant that English had become an integrated language, preventing a third one to take root  in the depths. Although with time passing, her constant relationship with the act of writing and diving into diverse cultures she finally felt more secure and confident.

It might also be that the barriers between herself and the adoptive country played a role  of compromise in her investment between those different cultures and languages. Eventually, the constant venturing in the translation of Hungarian literature allowed her exiled self to control the sorrow of having fled her native land, thus paying a debt. It was cheerful to listen to some of her convictions about the superiority of such Hungarian landscape, dish or cultural aspect of her homeland. She protected her origins as she protected herself from oblivion. I never felt like arguing on this topic.

It might be her position – halfway between Hungarian and French – that led me to translate Géza Csáth’s novels with her. I had been struck by the originality and the power of the author and in my enthusiasm suggested to have Csáth published in French. This meant the beginning of a long collaboration and resulted in the publication of Silence noir (Fekete csönd; Black silence, ed. Alinea 1988). It was a demanding, fascinating long-term work, where we both stood on that specific brink that separates two languages in a permanent back and forth dialogue to find the closest words to define as precisely as possible the original meanings and convey them to the other side of the bank.

It’s during the ‘80s that Eva elaborated her main contribution to Le Coq Héron. A few years before, she had left the Sociology Department where she stood in an awkward position, she who had fled a real Soviet country wasn’t considered as politically correct in this universe of leftist intellectuals, closer to Sartre than Camus. She finally found the proper ground for her research, in total freedom, in the Centre de recherches Historiques, one of the research departments of the EHESS (École des Hautes études en Sciences Sociales) as well as at the CNRS (Centre National de la recherche scientifique). Her thoroughness and passionate determination drove her to achieve her thesis: The History of the Psychoanalytic movement in Hungaryand submit it in 1985 (it was published by l’Harmattan,in 1993 1). In the meanwhile, invited by Judith Dupont, she took responsibility to develop the critic apparatus of the Freud-Ferenczi Correspondence which started to be published in 1992, ending in 2000. Eva Brabant’s name appears in Le Coq Héronfor the first time in 1982. Her collaboration with the journal becomes permanent and she enters the editorial board as a member.

At the time when Le Coq Héronleft the artisanal edition of Jacques Dupont (his publishing house was closing its doors) and taken over by érès, our current publisher. The board had been asked for someone to be named as director but Eva like all of us wasn’t interested in titles or any form of hierarchy – although she had been appointed by unanimous vote of the committee. She accepted only because she was the first by alphabetical order and so became Director of the publicationin 2002.

During four decades of active involvement in the journal, added to the impact of her parallel historical research, Eva brought her passion for languages and translation, not mentioning her impressive work capacity. She also enhanced our reflection by her personal journey with and into psychoanalysis and her clinical experience. Her understanding of the articles submitted to the journal was precious and always substantiated by her critical capacities and her wide and specific culture. Her acute sense of humor allowed her to avoid unnecessary confrontations, thus protecting the group. All who collaborated with her on an issue, article or translation can testify of the pleasure they experienced.

Until the very end she maintained her participation, wanting to be active, keep her mind at work even when the illness became exhausting tending to keep her away.

Eva you’re walking away from us carried away by your fate but you’re doing it your way, just as you always walked to your pace, to your own rhythm, steady with no haste. Beyond the silence, we still hear the sound of your voice imprinted by the same rhythm, it’s resonance, it’s variations, your slight accent. Eva, I’m using your words say what at the end I needed to tell you:

“We all have to create links, build bridges as well between past and present as between elsewhere and here, or other people’s worlds and ours. But who remains attached to two different cultures, he or she, becomes a living bridge.“

Eva, as you are slowly moving away on the other bank, I want to tell you how beautifully you succeeded, how much you gave us. With love, friendship and tenderness.