You are here: Home1 / New and Noteworthy

“Is it appropriate to hold an international conference when war is waging so close to Budapest? Sándor Ferenczi would certainly have answered this question in the affirmative. After all, he organized the 5th International Psychoanalytic Congress in September 1918 at the end of World War I.

Next year, in 2023, we will be paying tribute to the 150th anniversary of Ferenczi’s birth and of the founding of Budapest. Ferenczi’s clinical and theoretical work and his influence in integrating the ideas of psychoanalysis into culture, the arts and social scientific thought have created potential for development like the integration of the former towns of Pest, Buda and Óbuda to form a world city. The theme of the conference, as we intend it, offers an opportunity to approach the current phenomena and challenges of the 21st century in the spirit of Ferenczi. 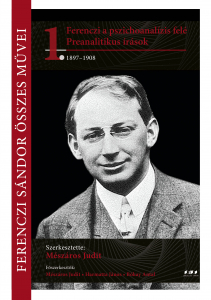 It is a pleasure to announce the publication of the first volume of the complete works of Sándor Ferenczi in Hungarian, a joint venture of the Sándor Ferenczi Society and the Oriold publishing house, Budapest.

Co-sponsored by The Sándor Ferenczi Centre and the American Journal of Psychoanalysis.
Webinar Information

We announce with great sadness the passing of our friend and colleague, Éva Brabant-Gerö, editor of Le Coq Héron.
View the Memorial

Carlo Bonomi, president of the International Sándor Ferenczi Network, gave an opening message on Ferenczi’s Renaissance during the online event. The role event was broadcasted live on Youtube:

The members and Board of the International Sándor Ferenczi Network mourn the passing of our dear colleague and friend Ferenc Erős.
View the Memorial

It is with great sadness that we share the news on the passing away of Professor André Haynal, father of the Ferenczi Renaissance and honorary member of the ISFN.
View the Memorial

IPAA Conference 2019: The Budapest School of Psychoanalysis from Ferenczi, the Balints and Beyond
Dublin, Ireland
Conference Information
PDF Advertisement

It is with great sadness that we announce the passing of our dear colleague and friend, Lewis Aron.
View the Memorial

International Conference, The Balints and Their World: Object Relations and Beyond
Freud Museum, London
View the Poster or Programme

The Balints and Their World: A Musical Celebration
University College School, Frognal, London
View the Poster or Programme

Centennial Conference, Psychoanalysis and Society – Then and Now 1918-2018
Hungarian Academy of Sciences in Budapest
View the Announcement, Invitation or Program

With great sadness we send you the terrible news of the sudden and tragic death of our colleague Jeremy Safran.
View the Memorial

Ferenczi in Our Time and A Renaissance of Psychoanalysis, International Sándor Ferenczi Conference
Florence, Italy
View Conference Program or Poster

FERENCZI IN FIRENZE, Summer Course
A program of seminars in preparation of the next International Sándor Ferenczi Conference, Florence May 3-6, 2018.
Visit the Summer Course page or View Program

Ferenczi, Elizabeth Severn and the Origins of Mutual Analysis
The Sándor Ferenczi Center at The New School for Social Research
View Event Details

The Grupo de Estudios Internacional Sándor Ferenczi and the Hungarian Imago Association, have applied to become members of ISFN.

The Hungarian Imago Association was founded in 2008 as sister organization of the International Imago Association. The Association has 48 members (psychoanalysts, psychotherapists, researchers, academics, students etc.), holds regular public meetings and every second year organizes a conference in Pécs on the topics of psychoanalysis and film. The Association publishes a review “Imago Budapest,” which was founded in 2010, and as of 2015 is published in electronic form. The founder and president is Ferenc Erös, professor emeritus and director of the doctoral program in psychoanalytical theory at the Faculty of Humanities at the University of Pécs, in Hungary. Effective September 2015, the newly elected president of the Imago Association is Dr. Anna Borgos.

Book Launch: The Legacy of Sandor Ferenczi: From Ghost to Ancestor (edited by Adrienne Harris and Steven Kuchuck)
Sponsored by the Sandor Ferenczi Center at the New School for Social Research
New York, New York
Read the Invitation

The Sándor Ferenczi Society invites you to the lecture “I am Boiling with Rage”: The tangled triangle of Freud, Ferenczi, Rank held by Robert Kramer, Ph.D.
Budapest, Hungary
View Invitation

The Sándor Ferenczi Society invites you to the lecture Contemporary Psychoanalysis and the Legacy of the Third Reich held by Emily A. Kuriloff, Psy.D.
Budapest, Hungary
View Invitation

Pedro Boschan, the president of the Argentinian Ferenczi Association has suddenly passed away.

Circular letter to donors about the purchase of the “Ferenczi House”.

On the occasion of the purchase of the “Ferenczi House”, the first Ferenczi House Lecture entitled “The Future of the Irma Dream, The overwhelming task of standing trauma” was held by Carlo Bonomi inside what once was Ferenczi’s villa in Budapest.
Read the Announcement

The Ferenczi House has been purchased.